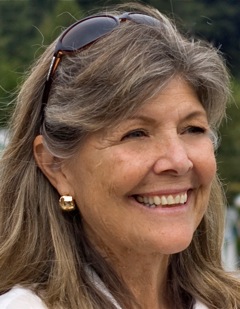 Tracey Barnes Priestley enjoys a career as both a writer and life coach. She spent the first twenty-five years of her professional career working as a psychotherapist, college instructor, writer and syndicated columnist (Juggling Jobs and Kids). Practicing what she preached, Tracey and her husband raised three kids in the beautiful redwood country of northern California.

One by one, her nest emptied and Tracey discovered that life after fifty was wonderful … even if it wasn’t always easy. Since her last child flew the nest she’s been very busy! In the last ten years she has: transitioned her psychotherapy practice to life coaching; written her debut novel, Duck Pond Epiphany; launched a new blog and print column, The Second Half; written, produced and starred in a one act musical, The Second Half … A Lively Look at Life After Fifty; appeared in Portland, Oregon’s national production of Listen To Your Mother; produced and hosted Wisdom in the Spotlight, a live performance that featured people between 54 and 93 sharing their personal essays on wisdom.

What’s Next for Tracey

Next up for Tracey? In collaboration with Humboldt Light Opera Company and Osher Lifelong Learning Institute, Tracey is launching The Boomer+Troupe, an ensemble of writers and performers, all over fifty, who will perform variety shows in small theaters, schools, and senior facilities. They  premiere in Those Fascinating Fifties, a musical walk down memory lane. (February 12 and 13. For tickets go to humboldt.edu/OLLI or call (707)826-5880.)

Finally, she’s currently wrapping up  CONVERSATIONS: Life in the Second Half, a PBS series that takes a look at this fascinating process called aging. It premieres January 28. (KEET/PBS, 7:30,channel 13 or online at keet.org.) This innovative  program highlights six individuals who are navigating their second half with empowered spirit and creative problem solving.