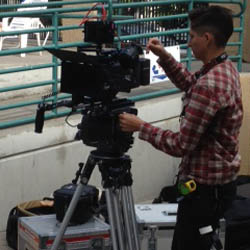 A few weeks ago, on a drive up to Portland, I saw a small, late model moving van. Painted a lively red, the truck’s entire side was one large sign: “Priestley & Son.” I pointed it out to my husband and we shared a little giggle. Rare is the day when we see our name anywhere. But what struck us as an even more humorous was the thought of plastering a sign on our car door that read: “Son & Priestleys.” Why? Because we were driving north to actually work for our son.

Twelve days before, our son called. He was producing and directing three television spots for the largest healthcare system in the Pacific Northwest. Might I be interested in doing a commercial that represented a woman’s life from birth to 75? She would also dance with her husband. He wondered if his father “would be game?”

We jumped at the opportunity. A ‘behind the scenes’ experience with video production would be a blast and best of all, we’d see our son at work. What parent could pass up this opportunity?

One night, my mind began to wander off in the worst possible direction. What if we let him down? I imagined the scene where I was supposed to be playing with my grandchildren at the beach. Maybe I’d inadvertently turn my back to the camera at the wrong time. What if the kids were little pills? How would we portray a happy family?  Worse yet, what if I did a face plant in the surf? The business of working for our child was taking on an added dimension.

I quickly changed gears, reminding myself that I wouldn’t know anything until I was actually there. To entertain such fantasies was pointless and entirely counter-productive. I knew I had signed on to this project for the adventure and I was going to make that my first priority.

When we arrived at the production offices, the staff seemed to fall all over themselves to take care of us. How lovely that this how our entire experience went.   The work took three very long days. We were ushered through wardrobe and make-up. Then we waited and waited some more. Lunch arrived, people chatted. It was a friendly set. We worked some, we waited some more. It all moved along at a fascinating pace. People spoke into their walkie-talkies. Equipment was moved into place. “Quiet on the set” became my favorite phrase, as it meant something was happening.

But what really fascinated me was watching my offspring out of the corner of my eye. Here was the kid who had made his first video, “Super Dad” as a nine year old. As an eight grader, he went off to the California History Day competition in Sacramento with his buddies and their video of the 1964 floods. I thought about how how happy he was as a teen when he would talk about growing up and having a career in film and video production.

He made it happen. For the last 12 years, he has been involved in everything from feature films and television shows, to music videos to advertising campaigns.

Knowing his history, it was gratifying to watch him in his element. But what was even more gratifying was how well he treated his crew. Yep, that’s what made his mom the most proud. Nearly fifty people swarmed around the set and their director/producer was clear, direct, and respectful. I knew exactly when his patience was taxed but he didn’t blow. Instead, he took people aside and told them what he needed. Composure was maintained, work resumed, and the job got done. Soon after, someone yelled, “it’s a wrap” and the entire crew erupted into applause.

As parents, my husband and I worked overtime teaching our children that good communication was one of those skill sets that could take them anywhere, especially when combined with a strong work ethic, competency, compassion, and respect. How fun it was to see our efforts played out right before our very eyes.