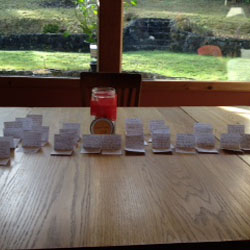 Technically, I suppose I’m a little late in wishing all of you a happy 2014. I hope you’ll accept my belated sentiments. I was visiting family in southern California for the holiday and I’m just now catching up.

During the long drive home, I thought about how many different New Year’s columns I have written during my couple of decades as a Q&A columnist. I generally find this time of the year to be easy to write about as I’m usually inspired by a new year. While I don’t go in for making resolutions, I do like to head into a brand new year with a positive attitude and a belief that I can make things happen during the next twelve months.

Yet as the miles droned on, I couldn’t quite put my finger on what it was I wanted to approach as we all looked into 2014.

Nope, my inspiration for today’s column didn’t arrive until January 1, 2014 and I have to tell you, I was a somewhat surprised when it did. By way of explanation, let me give you a little background.

I think I was in my mid twenties when a dear friend, a man in his seventies, offered me some sage advice. It went something like this: you don’t want to get to the finish line of life and look back on regrets. He was an advocate of taking risks, of living a little outside of the lines. He didn’t suggest that anyone go all willy-nilly but he did believe in educated and calculated living outside of one’s comfort zone. Most importantly, he thought that true failure only occurred when someone did not follow his/her dreams.

I wove this philosophy into my daily life. While not entirely fail safe, it has worked rather well for me.

So you can imagine my surprise when I felt a pang of regret on New Year’s day. Not a huge pang but that fleeting thought of “gee, I wish I’d been doing this for the last thirty years.”  You may laugh when I tell you what this is all about. Here goes.

Last year, I stumbled upon an idea that so resonated with me, I ended up giving it as a Christmas gift to my husband, as well as our three children to share with their significant others. What was it? An empty mason jar that would be used to collect positive memories from 2013. The instructions were simple – when something good happened during the year, write it down. I included a small pencil and pad of paper in each jar, tied a bow around it and crossed my fingers that they wouldn’t think dear old Mom had finally gone over the edge.

My husband was on board, bless his heart. (Maybe he was glad the paper was so small … it’s not like he had to write more than a few words.) And to my surprise, so were my kids. When we would visit their respective homes during 2013, I’d see their jars filling up.

It wasn’t something we ‘fed’ on a regular basis. No, we’d just drop in a sentence or two  when the urge hit. (I don’t think it would have worked if it became a big ‘should’ for anyone involved.) It was fun to watch it fill up and even more fun to make recording positive moments a priority.

The very best part was January 1, 2013 when we opened our jar! We took turns reaching in and reading the notes to each other. Oh my, what fun that was to look back over the year and recall the good times. It put both of us into a lovely frame of mind, appreciating each other and our lives. So positive was the experience, that we now have a 2014 jar!

And that was where the very brief dash regret came in … wishing we had known about this simple activity all those years ago, when something so straightforward, so satisfying would help us archive the goodness of our lives.