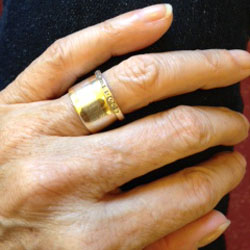 I’m a 54 year old, single mother of two teenage daughters, ages 17 and 15. I have been divorced for over seven years.

Two years ago I met a man. There was this instant click. We share many of the same interests and our temperaments match very well. The relationship has moved along at a nice clip and we are very serious about one another.

He gets along with my girls. It’s sort of unbelievable, but really, there’s not much fiction. I think this says a lot about him, especially since he’s never had any children of his own. He’s very patient but also kind and honest. (My ex lives out-of-state and rarely sees our daughters.) They really like him a lot too.

He has asked me to marry him and that’s where the problem comes in.  I haven’t actually said ‘no’ because I just can’t make up my mind about what I should do.

Our current arrangement works well. I think he has his eyes wide open about what marrying “us” would mean. I just worry that once we are all under the same roof 24/7, things might not be so rosy. He says I have plenty of time to make up my mind, there’s no rush and I believe him but I feel so awkward. (You should have seen the look on his face when he proposed. First, I burst out with a big smile and tears and then I answered with a “maybe.”)

I haven’t mentioned any of this to my girls. Don’t I need to know my own mind before I tell them? I feel foolish having doubts about such a genuine proposal from a man I love. Shouldn’t a 54 year old woman know what she wants?

You ask, shouldn’t “a 54 year old woman know what she wants?” My answer? Not necessarily.

While you sound extremely happy with this man and the relationship you share, this simply isn’t an easy decision to make. There are four very important lives to consider. And with reality as your guide — something younger people often tend to ignore — you wisely recognize that life will be different once you are all together, day in and day out. I applaud you for asking your question!

For starters, please forget feeling awkward. Sure, the proposal must have been a difficult moment. Forgive yourself and move on to the business at hand. If this man is as honest and genuine as you describe, surely he must know you well enough to understand why you would need time to make this decision. Hopefully, your thoughtful consideration of his proposal is worth something to him.

I understand why you haven’t talked to your daughters about this yet, you are also concerned about how they would react to this marriage. It’s time the three of you did some talking. There’s nothing wrong with them being aware of their mother’s decision making process. No, they don’t hold the deciding votes but having an honest discussion with them might make this process easier for you and ultimately, for them.

And then …  ALL four of you need to sit down to explore the realities of becoming a family. It’s beneficial to be realistic about some of the potential difficulties. Identifying possible issues and having strategies for dealing with them would make this an easier transition for all of you. (I only wish more couples in your situation would invest time into family communication! It pays off in the end.)

Finally, how much of your caution is the result of your first marriage? It would be perfectly natural for you to feel skeptical about matrimony after experiencing a failed marriage. But please don’t confuse these two men nor their intentions. Take time to sort through your previous experience. You may discover helpful insights that will steer you in the right decision.

Best of luck to all of you!